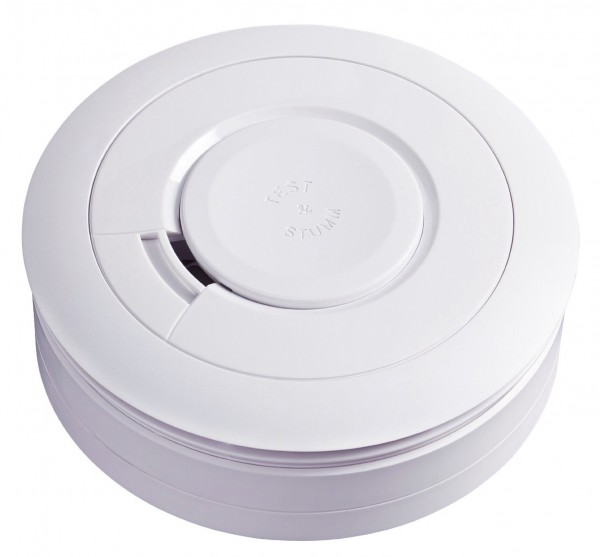 The Z-Wave smoke detector detects resulting fire and smoke emission reliable. In case of emergency it alarms acoustically.Thanks to Z-Wave wireless technology, you can define further actions triggered by the smart home control center in case of an alarm. To enhance safety, escape routes can be highlighted through automatic lighting, opening shutters and unlocking doors. If an electrical device (e.g. iron) is the causer for the alarm, it can be switched off automatically (if plugged to an intelligent wall plug).

With its integrated 10-year battery the smoke detector can be used for legally prescribed lifecycle without replacing the main battery. The Z-Wave modules battery can be replaced with just a few simple steps when the device informs the control center about low battery status. Low Z-Wave module battery has no influence to the smoke sensors functionality.

Additional functionality of this high end smoke detector includes periodic automated self test, dust compensation and special functions for sleeping rooms (no blinking) and easiness of use (large button for testing to be operated by a simple broom stick).

Furthermore the device can be used also as an independent indoor siren within the Z-Wave network. Connected to different sensors via control center it will alarm in case of detected flood or burglary additionally to smoke or fire alarm. Yon don't need to install another stand-alone siren.

The following downloads are available online